Paris, France – September 27, 2022  – Today, the cloud specialist SHADOW announced the availability of its services in Sweden, expanding to more than 70 million additional potential users in Europe.

Back in May, SHADOW made its first-ever Shadow Spotlight keynote and detailed its strategic vision for the coming years, delivering on promises made to its community. Now a global cloud computing company chaired by Octave Klaba, OVHcloud founder, SHADOW is moving forward notably by complementing its cloud computing consumer offer, Shadow PC, with the newest Power Upgrade, coming up October 26th, including in markets opening today!

The very first users who subscribe to our Shadow PC in Sweden will benefit from an Early Birds discount.* This discount, available in very limited quantities, is not time-limited and will remain active as long as the subscription is maintained or terminated, for a value of 5€ per month. Check our dedicated Twitter account for more details: Shadow International

SHADOW also recently released a new cloud storage solution for both personal and business use, Shadow Drive, as well as its services for professionals, Shadow Business Solutions. SHADOW now positions itself as the definitive cloud platform for gamers, creatives, and businesses.

SHADOW’s original product launched in 2016 offering the aim of allowing all individuals to enjoy the power of a high-end PC within the cloud. The revamped SHADOW subscription service features an updated plan: while the starting price remains 29,99€ per month, the company now offers a brand-new Power Upgrade, available for an additional 14,99€.

The new Power Upgrade will feature a full PC including:

The Power Upgrade will be deployed in recurrent batches starting October 26, but no queue system will be put in place: the Upgrade will simply appear available (or unavailable) on the SHADOW website depending on the current status for each region. 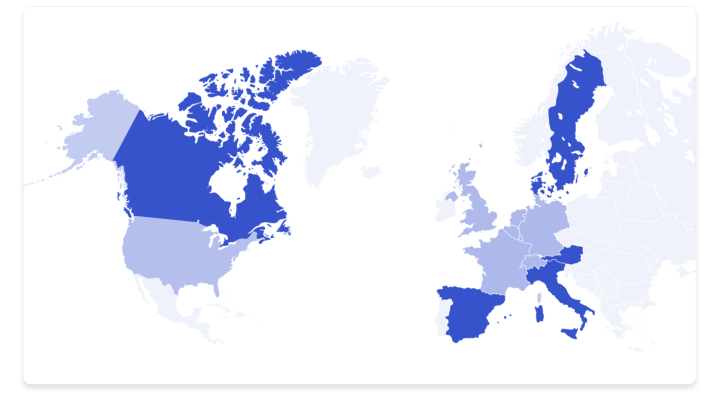 Along with Shadow PC dedicated to customers, the brand is also opening business-oriented services in these new territories. Shadow Business Solutions can be accessed by professionals starting today in Sweden and Denmark.

Shadow Business Solutions will allow companies to create, manage, and access a range of professional Shadow cloud-computing units, starting from a single high-end workstation, up to the massive rendering power of full servers. All while benefiting from the streaming quality, responsiveness and ease of use of Shadow at an incredibly competitive cost.

Ahead of availability in each territory, SHADOW’s team, in collaboration with our partner OVHcloud, are certifying the quality of connection via dedicated ping tests. Future users will also be able to find out if their localization is eligible for Shadow offers before subscribing. SHADOW’s current network of datacenters is composed of eight units, located in France, Germany, the United States and Canada.

*for consumers only. Prices and offers differ for professionals, check our dedicated page for more details

About SHADOW
At SHADOW, we strive to become the definitive cloud platform for gamers, creatives, and businesses, because we believe that cloud innovations have the potential to bring technological freedom to all. SHADOW delivers state-of-the-art cloud-computing experience to consumers, via its original Shadow service, and to professionals via its Shadow Business Solutions. It developed the first ever high-end cloud PC to play, create and work on any device. Shadow has more than 150 employees based in Europe and North America. Join us at www.shadow.tech. Check out the latest news on shadow.tech/blog, and follow them on Twitter.

About OVHcloud
OVHcloud is a global player and the leading European cloud provider operating 400,000 servers within over 33 data centers across four continents. For 20 years, the Group has been leveraging an integrated model that provides complete control of our value chain, from designing our servers to managing our data centers to orchestrating our fiber-optic network. This unique approach enables OVHcloud to independently cover the full spectrum of use cases for our 1.6 million customers across 140 countries. OVHcloud now offers customers the latest-generation solutions that combine high performance, predictable pricing, and complete data sovereignty to support their unfettered growth.