LONDON (16th July, 2018) – SQUARE ENIX® today announces all the information of what players can expect when its highly-anticipated collaboration with Capcom’s Monster Hunter: World™ arrives in FINAL FANTASY® XIV: Stormblood™ on 7th August. The upcoming crossover, first revealed during this year’s ElectronicEntertainment Expo (E3), will test the mettle of players as they face off against the “King of the Skies,” Rathalos. 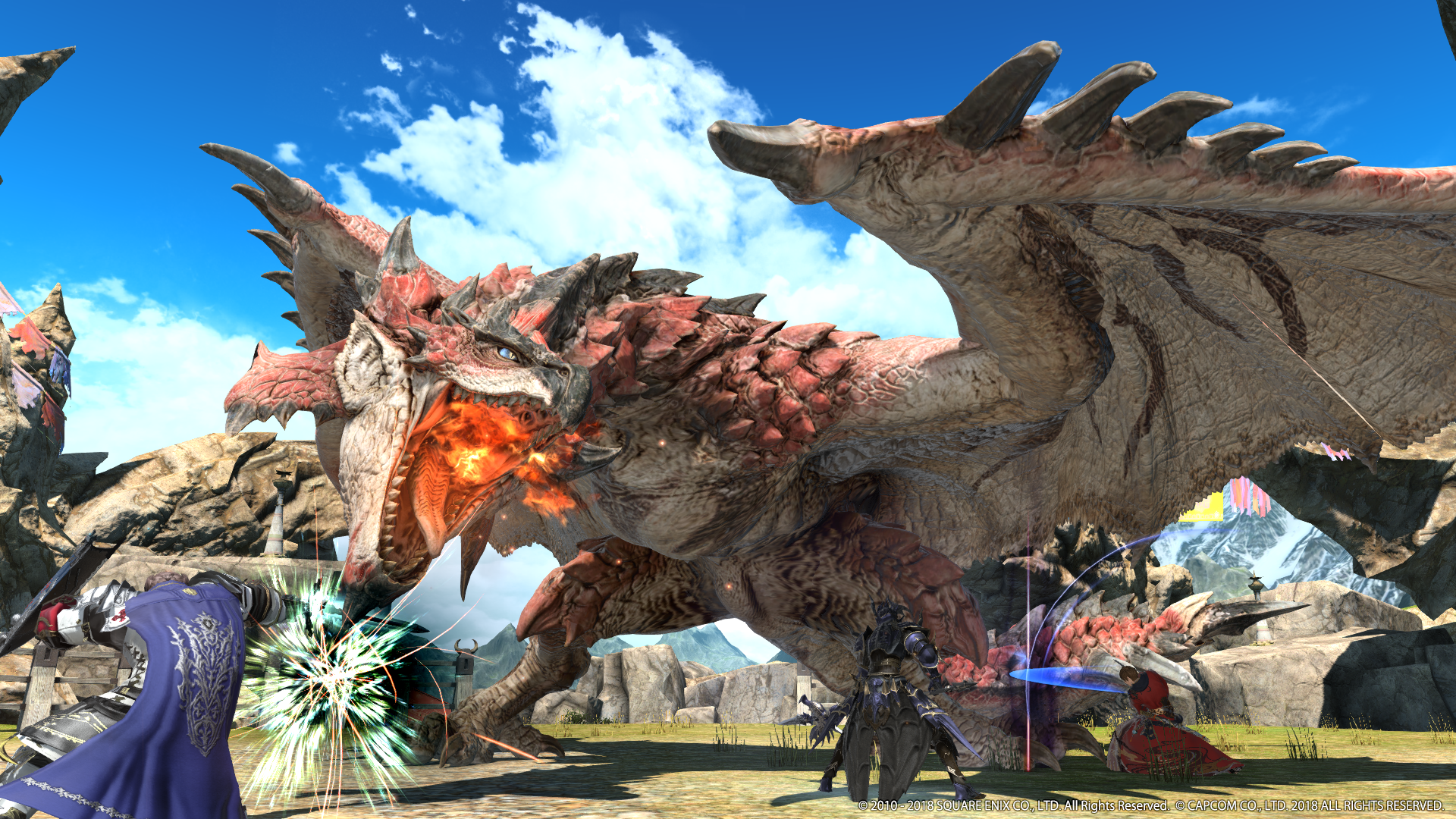 Hunt the “King of the Skies”!

Arriving as part of the Patch 4.36 update alongside the next installment of The Forbidden Land Eureka titled “The Pagos Expedition”, Level 70 players who have completed the “Stormblood” main scenario quest will be able to take on the mighty beast in both Normal and Extreme versions of “The Great Hunt” Trial. While the Normal version will see eight Warriors of Light team up to try and emerge victorious, the Extreme version will challenge four players to defeat the monster, while featuring certain additional mechanics in homage to Monster Hunter: World. 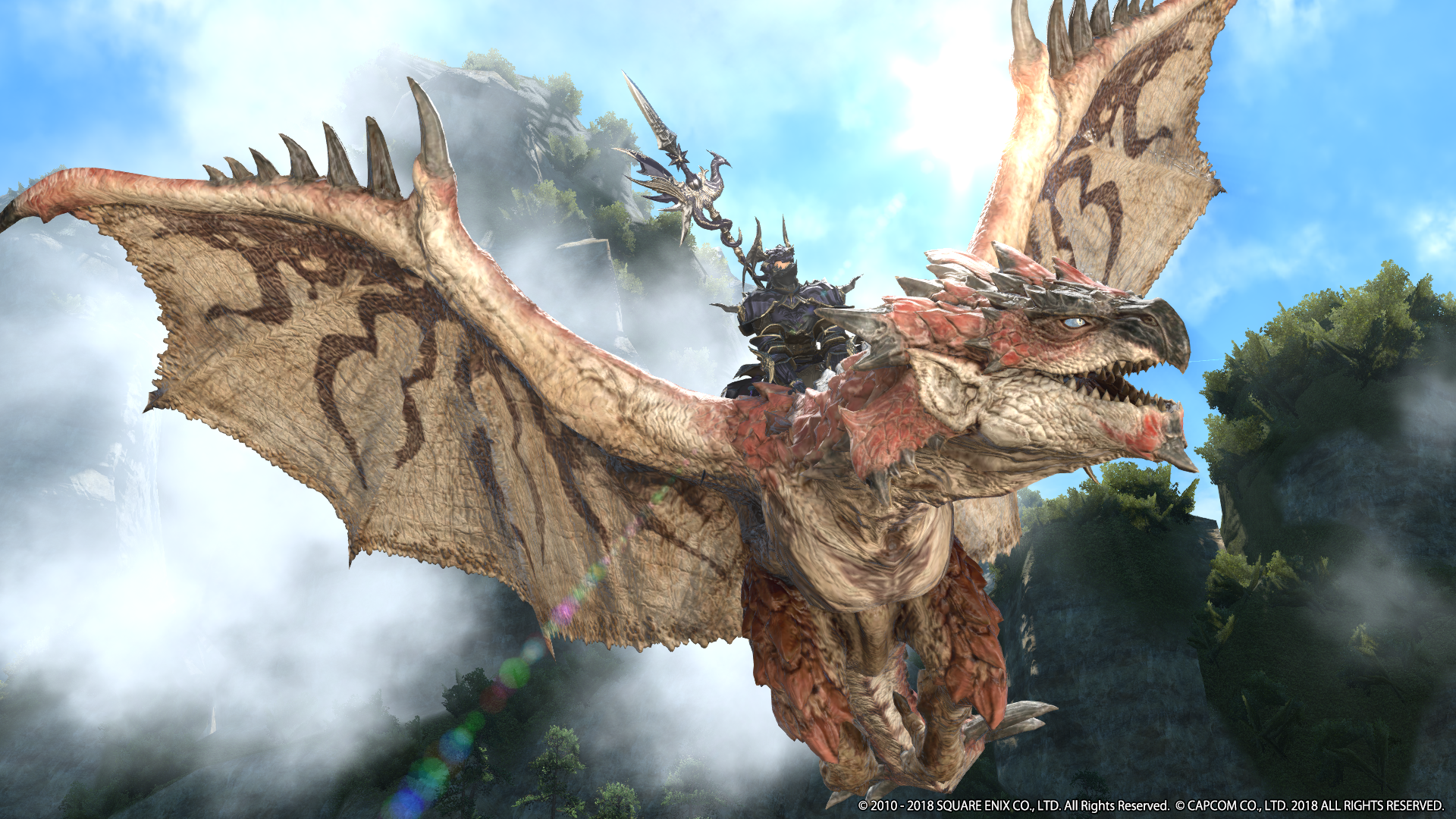 A Dragoon rides the Rathalos Mount 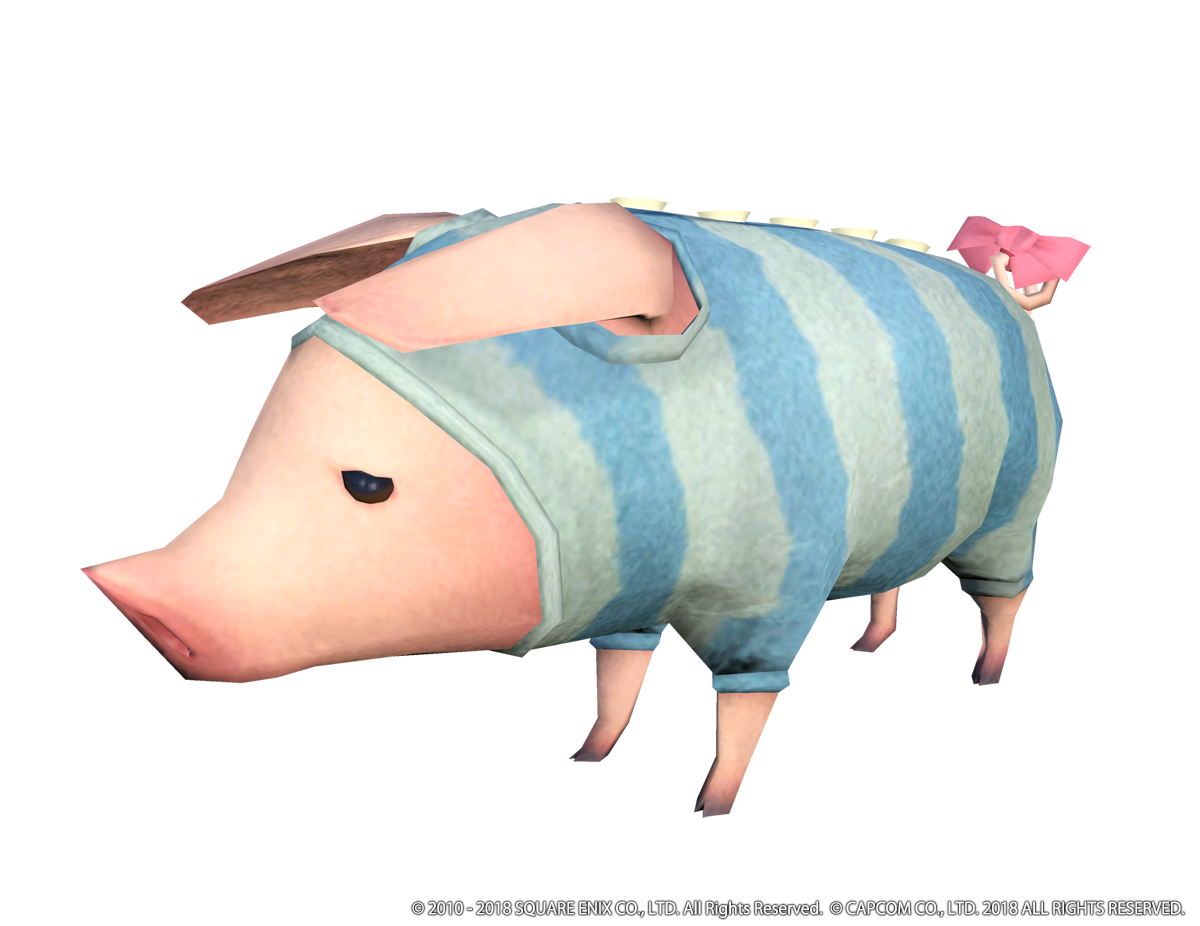 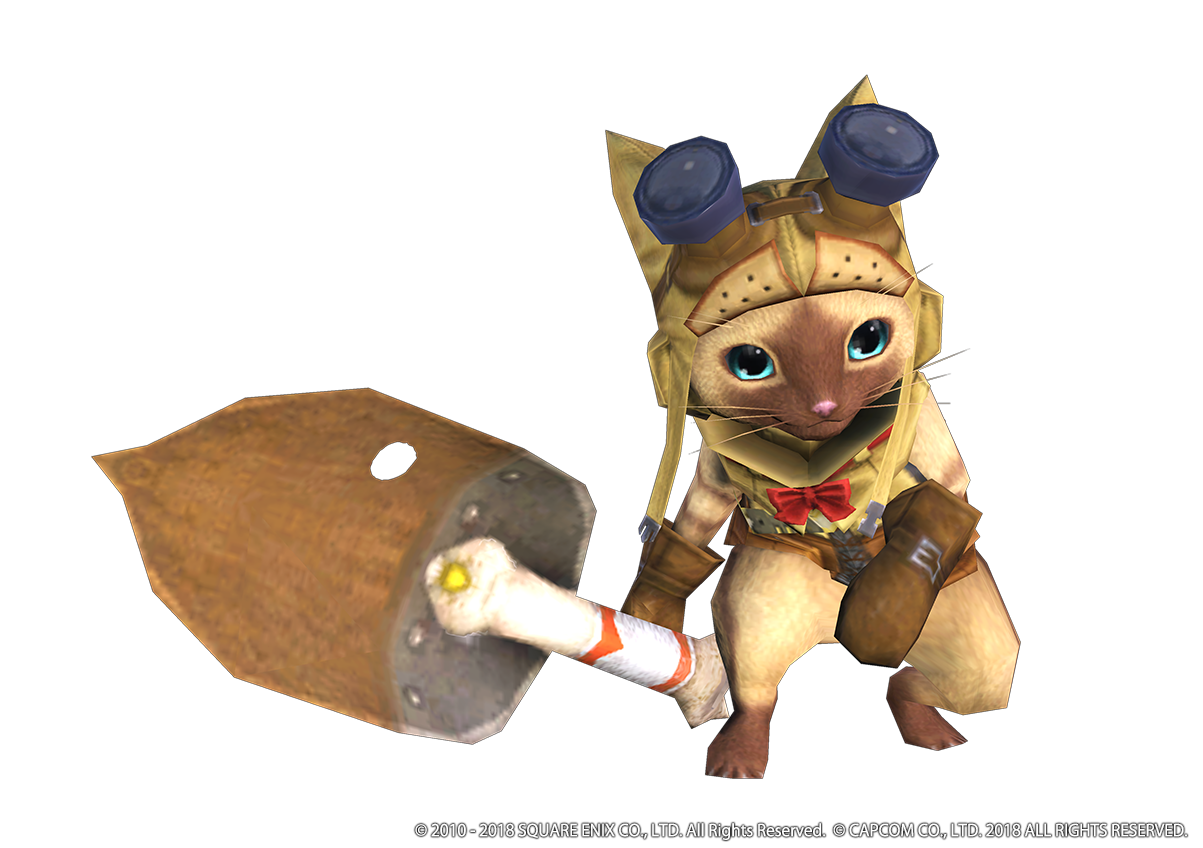 A range of rewards will be available as part of the collaboration:

Check out the brand new trailer for the collaboration here: https://youtu.be/rJuaLF131Qw

Additional details and full conditions of participation for the crossover event are available on a special collaboration website: http://sqex.to/3sI 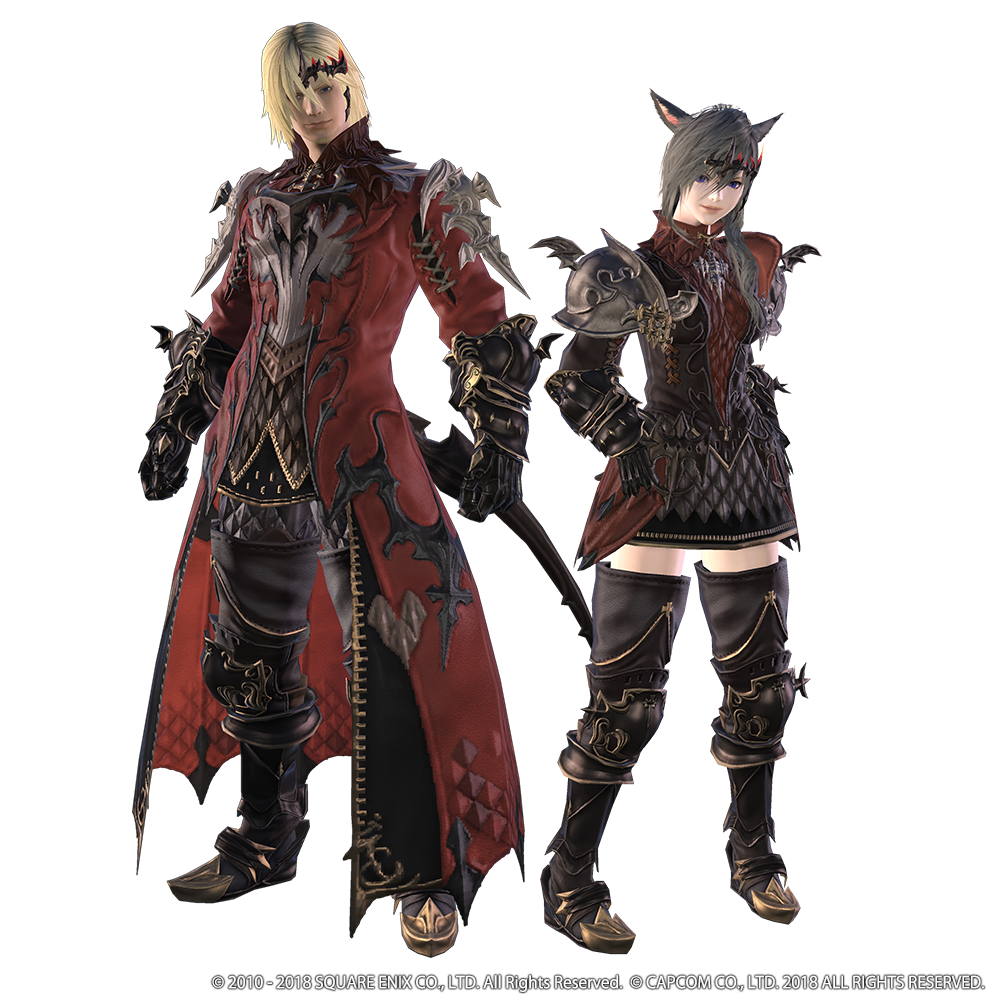 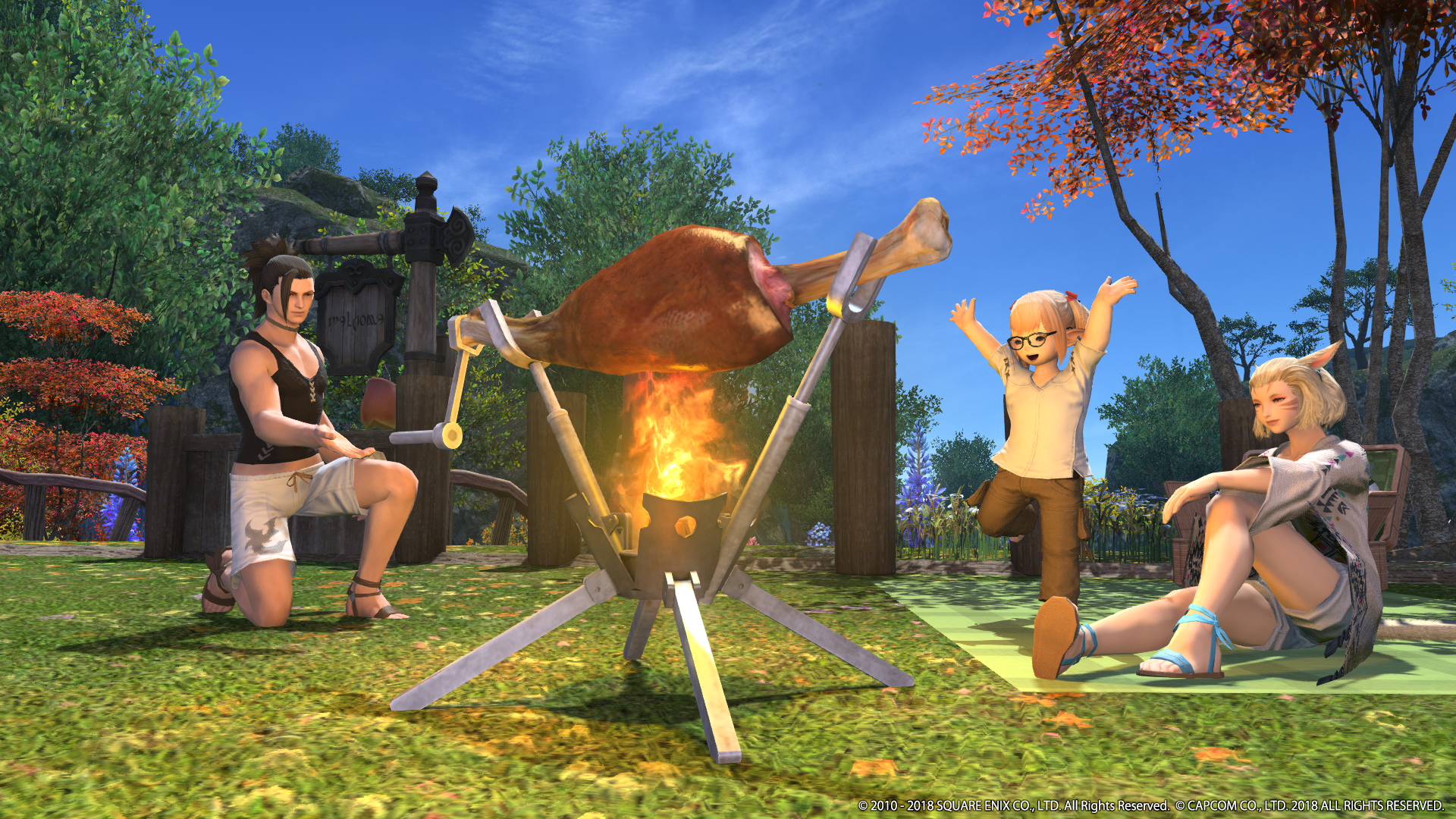 Also during today’s Letter from the Producer LIVE, Producer and Director Naoki Yoshida gave a first tease of what’s to come after the collaboration, in the upcoming Patch 4.4: Prelude in Violet:

Fans can also look forward to an exciting season of FINAL FANTASY XIV Online Fan Festivals all over the world. North America will kick off the tour on November 16-17, 2018 in Las Vegas, followed by the European Fan Festival on February 2-3, 2019 at the La Grande Halle de La Villette in Paris, and ending with the Tokyo Fan Festival in March 2019. Additional details may be found here: https://fanfest.finalfantasyxiv.com/

About Capcom
Capcom is a leading worldwide developer, publisher and distributor of interactive entertainment for game consoles, PCs, handheld and wireless devices.  Founded in 1983, the company has created hundreds of games including ground-breaking franchises Resident Evil®, Street Fighter®, Monster Hunter™, Ace Attorney®, Mega Man® and Devil May Cry®. Capcom maintains operations in the U.S., Canada, U.K., France, Germany, Tokyo, Taiwan, Hong Kong and Korea, with corporate headquarters located in Osaka, Japan.  More information about Capcom and its products can be found at www.capcom.com or www.capcom-unity.com.